Working Knowledge # 3: Robots at Your Service 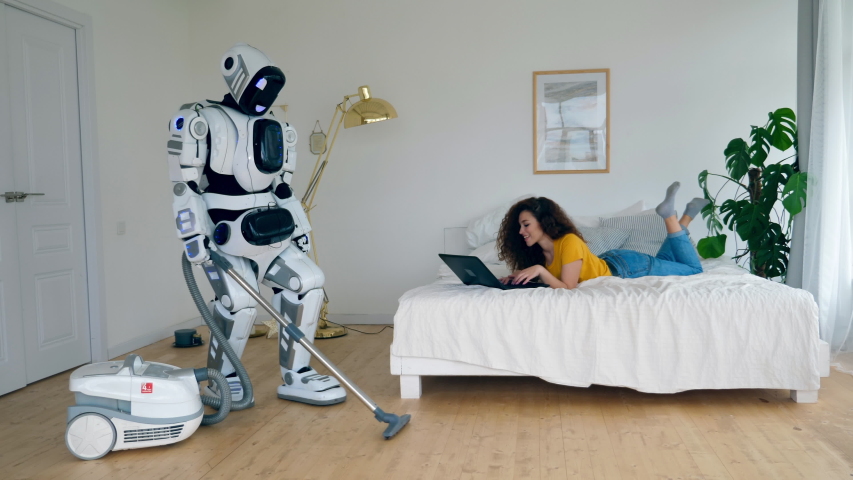 The spread of COVID-19 and the resulting cascade of lockdowns around the globe has prompted many thoughts about the future, particularly the future of work. We all expect artificially intelligent robots, physical machines that can learn and make decisions, to automate certain tasks in the workplace; we are just not sure when. The pandemic, lockdown restrictions, and social distancing guidelines have impacted global production and prompted companies to reevaluate their automation plans. In a March executive survey, E&Y found that 41% of executives plan to accelerate their investments in automation due to COVID-19. Factories and warehouses are ripe for automation, and many companies like Amazon, Apple, Boeing, and Tesla have attempted to automate certain tasks over the past years with mixed success. More recently in May 2020, BMW partnered with NVIDIA to optimize their factory logistics and car production with robots that transport, organize, and pick automotive parts and materials. These past automation attempts were targeted at operational efficiency: increasing production and reducing costs.

What is unique about the current pandemic situation is that it creates a productivity-zapping labor shortage through a combination of government intervention, workers’ reluctance to risk exposure, and employers’ concern for the health and safety of employees. Yet the need and desire for businesses to continue production does not abate during these times. Products need to be made, transported, and stocked on shelves for society to function. Netflix’s American Factory documents Fuyao Glass America, Inc.’s decision to automate its glass factory in Ohio after missed production goals and a deteriorating relationship between management and labor. Although this documentary is not directly related to COVID, it shows that AI-enabled robots are solutions for removing production bottlenecks caused by the lack or inefficiency of human labor. The current pandemic could be the catalyst for a wide range of companies to seriously invest in automating their factories and warehouses.

The coming wave of capital investment in advanced robotics and automation will be driven by companies’ need to:

Before we dive into robotics and automation, we should understand how capital investment works at a high level. Companies invest in their factories and warehouses by typically buying or leasing fixed assets (i.e. land, buildings, machinery). Buying is self-explanatory: a company uses its cash or a loan to buy an asset. In a lease, a company pays an upfront cost and regular cash payments over the lease period. At the end of the lease, the company can either buy the equipment or return it to the lessor. When deciding on whether to buy or lease an asset, a company has to balance several considerations:

Asset manufacturers may provide financing for their customers who decide to buy and lease their products. Major automotive companies provide loans and leases directly through captive finance companies (“captive fincos”), wholly-owned subsidiaries dedicated to providing financing solutions. Large tech hardware companies like Dell, Xerox, IBM, and HP also provide financing through captive fincos. These massive companies generate enough cash to be able to provide these financing options and often borrow from banks with their portfolios of loans and leases as collateral, or sell these portfolios to institutional investors as asset-backed securities (“ABS”). There are even more esoteric financial products such as solar ABS where payments for electricity generated from solar panels are packaged into a special-purpose entity (“SPE”) and sold. By borrowing or selling these portfolios to banks and investors, captive fincos and SPEs generate more money to finance customers and operations, which inturn generates more revenues to produce more goods.

Now what do the last three paragraphs have to do with robotics and automation?

Investment considerations and financing options drive the adoption of robotic automation in factories and warehouses by affecting both the supply and demand for robots. Although the cost of automation has been declining over the past years, robots themselves are still relatively expensive. While a standalone robot may be helpful, companies need fleets of robots to maximize their return on investment associated with the robots themselves, IT infrastructure, redesign of workflows, and integration into the factories and  warehouses. Massive corporations have the scale and cash to take on these risks and pay the large upfront costs associated with such investments, or to even acquire robotics companies for themselves. However, smaller companies with less resources may find the initial investment prohibitively expensive. To increase the adoption of robots, the robotics industry has borrowed a business model from the software industry: robotics as a service (“RaaS”).

The RaaS model allows companies to “subscribe to” robots instead of making a one-time purchase upfront or entering into a lease. Although RaaS shares some similarities with a traditional lease, the subscription model provides additional flexibility in how productivity is measured and paid for. Companies can pay per pick, per square mile traveled, per round trip, per any measurable activity, or just pay a flat fee for a given period. From this perspective, robots are framed as labor replacing and the cost is easily comparable to the wages of human labor.

For the robotics manufacturer, the RaaS model provides a steady, predictable stream of contracted cash flows instead of lumpy cash flows based on sales. This stream of cash gives the robot manufacturer more certainty when strategizing for the future and attracts venture capital investors. Venture capital firms value robotics companies with RaaS models at higher multiples, as shown by data from Silicon Valley Bank’s report on robotics (which is a great primer on robotics and automation in general). However, the RaaS model does create a cash flow challenge: the cost of the robot is recovered over time instead of at the point of sale. Let’s explore how the cash flow profiles differ between a RaaS model and a sales model with some basic assumptions:

In our example, a robotics manufacturer (let’s call it “Robo Corp”) can make a robot for $1,000 over one month and wants to profit $500 on each robot. It takes another month to find potential customers while the robot sits in a warehouse as inventory. But before Robot Corp begins approaching clients, it has to decide whether to sell the robot for $1,500 upfront or rent it out and accumulate $1,500 over 18 months. The chart below illustrates what Robo Corp’s cumulative cash flows would look like under a sales model and under a RaaS model:

If they sell their robot, Robo Corp will be paid $1,500 at the end of Month 3 and can manufacture another robot. But if Robo Corp rents the robot over a 18 month RaaS contract, it will have enough money to make another robot in Month 14. It takes Robo Corp more than a year to recover the manufacturing costs under a RaaS model compared to only 3 months if they sell the robot. However at the end of the RaaS contract, Robo Corp can rent out the robot again and earn more than their $500 profit target per robot.

For the end customer, the cash flow profile is the inverse of Robo Corp’s. The customer can either pay $1,500 upfront or over the life of the contract.

The time period for RaaS companies to recover the cost of manufacturing will vary from firm to firm, and this datapoint is probably kept confidential by the companies themselves and their venture backers. But it is almost guaranteed that reducing the recovery period is one key performance indicator being watched closely. I’m going to make a semi-educated guess and say that a cost recovery period shorter than 12 months is very desirable for a RaaS company.

On a commercial production scale of hundreds or thousands of robots per year, we can see that a robotics company is a very cash intensive business to operate. Without financing support from venture capital and banks, RaaS companies won’t have enough cash to scale up quickly, but do have the potential to earn more per robot in the long run. Robotics companies are not big enough to have their own captive fincos or SPEs yet and have to rely on venture capital and banking products to finance their growth and operations. As the industry matures over time, robotics companies will probably grow and look like today’s industrial companies that have access to financial markets (equity, bonds, securitization, etc) to fund their operations.

The Author would like to thank Austin Badger at Silicon Valley Bank for fielding questions related to the SVB Future of Robotics Report.